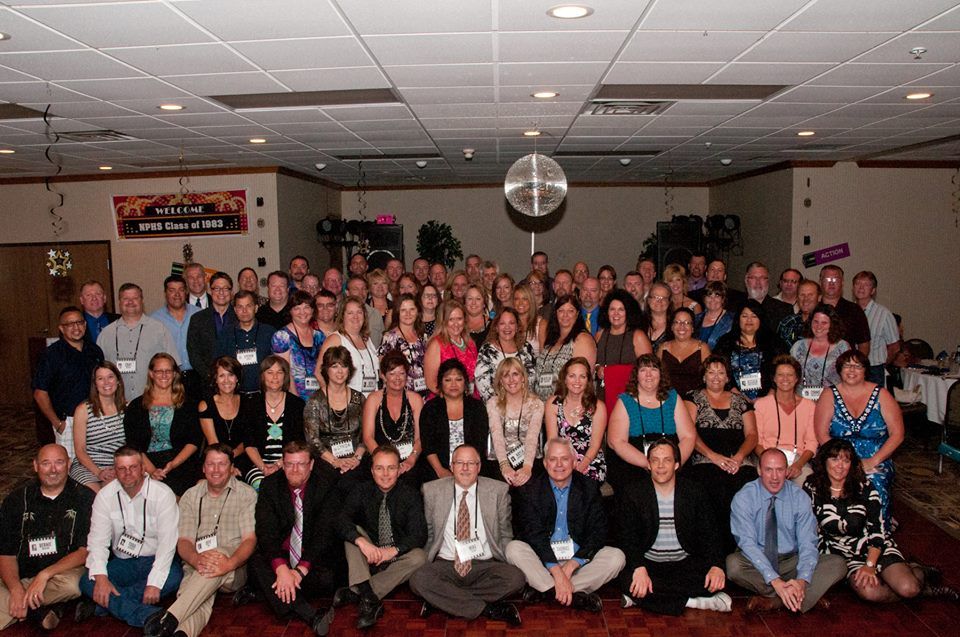 Thanks to everyone who participated.

For those who attended, all we can say is,
“Wow, what a ride!”

To those who couldn’t attend, you missed (among other things):
➢ revelations of school crushes
➢ confessions of scandalous illegal activities.
➢ public apologies to teachers for mischievous behavior and
➢ admonitions of alcohol abuse
(… and those were just a few of Mike Olson’s revelations!)

We ignited the reunion rocket ride Friday night starting with a classmate/ spouse reception at the Holiday Inn Express, followed with that adhesive we all love, music from the 80s. And who best to deliver it than a band named “That 80s Band.” While we didn’t dance as much as we used to, the music was the perfect backdrop to reacquainting each other with our new (older) appearances. A special thanks to Darren Doucet who worked for months to arrange the band and then had to skip out due to a threatening wildfire back home near Colorado Springs.

Most of the crowd wimped out and called it a night before midnight, but a handful of the usual suspects kept the party going until 5 a.m. Saturday. God bless you and your overly stout livers!

Saturday morning, a bleary-eyed Bernie led a tour of a dozen or so classmates through the new high school. With a little name dropping, throwing his weight around and some clever social engineering, Bernie was able to cajole James Ayers into letting the group into the education pods. Just before getting thrown out of the group as an unrecognized stranger, Eric Sukraw revealed his identity.

The Nebraskaland Days Parade was Saturday afternoon’s big event. Lots of big trucks pulling flatbed trailers. And lots of shit left in the street by the prancing horses.

Of course, Saturday night was the main event. Randy Knox unleashed his cute wife Lesley and her shepherding skills to corral us together for a group photo. She was clearly not intimidated, and the picture turned out great.

From there it was on to the banquet. Jay and Bernie shared M.C. duties to welcome everyone, and recognize the people who put in the hours and efforts to make our reunion the rousing success it always is.

A game of classmate trivia determined which tables went through the buffet line first. You KNOW Bernie wasn’t going to settle for 2nd place in that competition.

With Bernie at the mic, we gave recognition and thanks to those who have served in the military, as well as classmates whose children may be serving right now. We also thanked those who face danger working to keep our communities safe from harm: police and firefighters. And of course those who have followed in the steps of the people who taught and inspired us, our nation’s educators. That was a good segue to some special guests we wanted to honor in person, a handful of our favorite teachers, selected by students.

Five people were chosen as our most inspirational teachers and received a special award at the reunion.

Classmate comment: Probably influenced the most students in our class. The number of students who went on to teach or play music who had him for band was quite impressive.

Classmate comment: Many students remember having passes signed, “B Cool.” Mr. Cool responded, “I'm honored and pleased to be selected by my students for your award, but my health won't allow me to attend your event. I'm very sorry and send my love to all my kids, and remember.... B Cool.”

Classmate comment: Mr. Oltmanns always had a smile, had more patience than anyone I knew and was willing to do what it took for as long as it took so you would understand the math concepts he was trying to teach. I remember seeing how many classes were available in math that I could sign up for those he taught just because his class was so enjoyable.

Classmate comment: Not only was Linda a great teacher, but she was an awesome mentor for me. I think she had a big part in helping me become less shy. She truly was a great friend. She continues to be a mentor for youth today!

Classmate comment: Mr. McFarland saw the potential in each student and encouraged us to do and be our best, while still making class fun and interesting.

Thank you to all of our honored Teacher-guests for inspiring us.

Next was a story written by and involving Mike Olson. You can read it in it's glorious entirety by clicking here.

Banquet agenda:
• Welcome
• Honoring classmates in the military, in public service and educators
• Special teacher awards (Carol will send this to you)
• A story from the high school trenches - Mike Olson
• Honoring deceased classmates
• Special awards
• Thanks to sponsors/supporters (see list below)
• Recognition of the planning committee (see list below)
• Winner of $370 in the 50/50 raffle: Kraig Baade
• DJ / Dancing

Travelled the furthest
Doug Twyman Wiesbaden Germany
Award: Mile High Club
Gift: Certificate to present to flight attendant for a free pass to ride
For travelling the furthest to attend the North Platte High School Class of 1983 30th reunion, Doug Twyman is hereby presented with the MILE HIGH CLUB award. Please present this certificate to your flight attendant for a free pass to ride. We figured that after traveling this far to get here, Doug may as well make the trip home interesting. Just be careful which flight attendant you present it to!

Most Grandchildren
Award: The Repro Man
Darrin Hansen
Gift: multi-photo picture frame
Our master of multiplication is making sure the world will always have an ample supply of Hansen DNA. While the Reunion Committee doesn’t have the funds to help you display pictures of ALL your offspring, this first installment is a start. You’re going to need a lot more.

Number of jobs since graduating
Award: The Horizontal ladder climber
Robert Schmelzer 30+ jobs!
Gift: Stack of resume paper
One the business cards got to be too much to keep track of, Robert decided to fire the employers and become self employed. Let’s just hope your current boss is happy with your performance. If that doesn’t work out, this stack of resume paper will serve as a head start on your next ten job applications.

Classmate most improved with age
Award: Secret aging man
Steve Tatum
Gift: A bottle of wine
Has Steve discovered time travel? Maybe he’s been doing formaldehyde-based boilermakers. Or has he located the long sought fountain of youth? Whatever it is, scientists and skin care companies have been stalking him for his secret. We presented him with a vintage bottle of wine, which has been aging since 1983 – apparently unlike Steve.

Still crazy after all these years:
Award: “Hold my beer and watch this … “
Gift: Bail Bond Certificate
Julie Anderson
We all expect Julie to make a big appearance on a viral YouTube video one day, followed by jail the next! This gift certificate is for a bail bondsman of your choice. Presented to “Big Julie” on behalf of the NPHS Class of 1983 for staying crazy after all these years. (Small print: The class of 1983 reserves the right to deny having ever known the bearer of this certificate.)

Classmate who has mellowed the most:
Award: They call me Mellow Rebel
Mike Carper
Gift: Bottle of Mellow Yellow with a mini bottle of tequila
Now that life has taken Mike full circle and turned him into a mild-mannered philosophy professor, he may forget what a radical student he used to be. On one of those days you’re feeling a little subdued, chug that sugar-filled bottle of Mellow Yellow and chase it with some tequila. Wait 5 minutes and unleash a torrent of spirited debate with the first person you encounter. It’s the good old days with a dash of mischief!

Least recognizable:
Award: Who the hell did you say you were again?
Jerry Thompson
Gift: small pocket mirror with his high school photo on one side and a mirror on the other.
If you ever have as much trouble associating your name with your changed face as we did, this simple memory-jogging device will help. We’ve also had some inquiries from the makers of facial recognition software who would like to “torture test” their equipment with your likeness.

Classmate you were happiest to see:
Award: Mr. Miss You Award
Joe Maciejewski
Gift: T-Shirt: Nebraska Makes Me Happy (huge smiley face)
Because all of us are so happy to see you. Thanks for dropping by Joe! It wouldn’t have been the same without you.

Classmate(s) you most wish could have made it to the reunion:
All of them!
Awwww … [sniff]
Tissue please!

The following post appeared on the Class of 83 Facebook group page on May 31, 2013:
Dear organizing committee, you know how I love winning things. So I thought I might make some suggestions on awards that you could give at the reunion that I would be sure to win. How about most divorces? Or maybe greatest disparity between your graduating rank and your children's? Or maybe best breast implants? No wait. I would be super bummed to lose that one.

Always up for a challenge, the committee responded with vigor. Sheryl received the Booty Slide because the only thing that’s ever disappointing about breast implants is when the top half looks perfect… but the lower “ASSets” don’t hold up. We know she’s got the whole package today. But we want to be sure she doesn’t lose any of that magic between now and the 40th reunion.

To wrap up the weekend, a good-sized group of classmates gathered at Memorial Park with kids and grandkids in tow on a perfect day for a picnic. The crowd enjoyed pulled pork and chicken sandwiches, chips and salads. The bouncy house was a hit for the children.