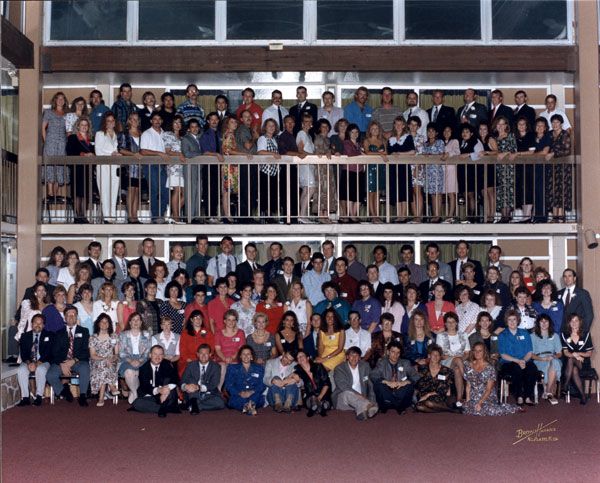 Schedule of Events for the 10th Reunion:

7:15 pm
Formal banquet dinner and brief program at the Holiday Inn followed by music and dancing.

Changed the Least - Jill Ward received a book on "growing up" to help her adequately prepare for the 20th reunion.

Most Kids - Tie, Chris Wood and Lisa Murdock, each with 5 children. Chris and Lisa were awarded a year's supply of condoms.

Most Dramatic Hair Loss - Doug States received a hair net and a brush in memory of the "good old days." NOTE: Bernie Madison was disqualified because he had already lost most of his hair by the time we graduated.

Improved With Age- John Homan received a bottle of wine for his graceful ascent toward 30.

Still Crazy After All These Years - Bernie Madison. Hopefully Bernie will never grow up.

Mellowed the Most - Vangie Linsted Steward was given an ample supply of No-Doz to help keep the crazy days in check.

Barely Recognizable - Mike Olson received a Dead Kennedy's t-shirt to go with his three piece suit and reinstate the classic panache he once knew.

Traveling the Furthest - David Surber made it back to North Platte from his residence in Japan. He was awarded a compass to help find his way home.

Most Unique Occupation - Jana Gillaspie works as a "Prestress Erection" specialist for Rocky Mountain Prestress in Westminster CO. She received a career handbook to help plan her next career move.